When using our timecard system, the Timecard Errors Report show you instances where employees have clocked in and forgot to clock out, or clocked out but hadn’t clocked in. 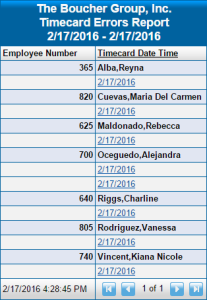 When using our timeclock system, the Payroll Report provides a summary of regular and overtime hours and pay by employee. This report is typically used to enter time into a payroll system. 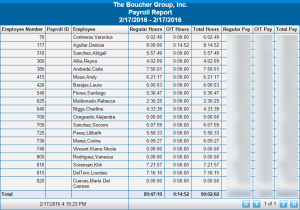 When using our timecard system, the Timecard Reconciliation Report provides a comparison between timecard hours and work session hours (hours spent at the press or loading station). It also shows the amount of time between clocking in and starting work, ending work and clocking out, and the quantity and time spent on breaks.

When using our timeclock feature, the hours utilization report will give you a quick comparison of timecard hours versus work session hours (hours spent at the press or loading station). 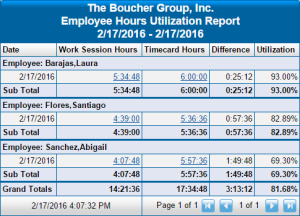 Setting Up for Clean 2015 in Atlanta, GA

We noticed an immediate increase after just one week with the piece counter.  Our overtime has been reduced, and we see more accountability in the employees without the constant ‘discussions’ about their numbers.  It is right there in front of them and us!  This puts everyone on the right track.

Having the PieceCounter is like having a manager that spends all his time watching production.  It takes that personal element out of production management that both management and pressers dislike so much. It makes the numbers black and white.  The pressers are either performing to company standards, or they are not.  The information is right in front of the pressers so they know at all times whether or not they are meeting their goals.

I was not sure how my pressers would react to the PieceCounter.  To my surprise they love to know how they are doing and like to compete with each other to see who had the best numbers for the day.

I have also started using the time clock system, which automatically calculates daily and weekly overtime.  When the time clock is used in conjunction with the PieceCounter, you can see a report that shows how much time each day a presser was clocked in and not in a work session.

Net results: there is no better way to track production.  The pressers love knowing how they are performing and I know whether or not we are meeting our production standards no matter where in the world I am, as long as I have internet access.

Much more than a piece count system, its a way of management. Any plant owner/operator will need this management system in order to be successful.

Before we installed it, everyone knew they were in a race, they just could not see the horse in front or behind them. There was no way to tell if they were winning the race. Now they can see how they are doing. Everyone is highly motivated to be successful by our work measurement bonus program. Quality is not sacrificed because we continue to use hanger identification tags, poor quality are returned and re-pressed without being counted.

The bottom line...productivity was at 94% before installing the PieceCounter, we now average 101% - better than a 7% increase. Our pressers are pleased with the system.

We will be using the system as a time clock as well, efficiencies to follow I am sure.

I just returned from visiting our shirt pressing department and noticed that the piece count device on the Unipress machine balanced perfectly with your piece count system. When we looked at your equipment, in the back of our mind there was distrust as to how accurate the system could be. Its extremely accurate and we thank you for your dedication to perfection.

We have experienced a substantial increase in productivity as a result of the piece count system. YOU GUYS GET A 10++++!