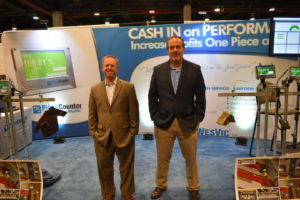 WesVic Systems was founded by brothers Craig and Chad Boucher. They grew up learning about the family dry cleaning business from their father, Harry Boucher. Both Craig and Chad worked in the cleaners all through elementary, high school and college. Craig went on to receive a degree in Information Systems from California State University Stanislaus while Chad received his degree in Business Administration from Fresno Pacific University. After their university work, Craig went to work as a programmer in the California State University system. Chad went in to the family dry cleaning business and eventually acquired it from his parents at their retirement.

While managing the cleaners Chad looked at the dry cleaning industry and realized there was a need to simplify management by using technology. Chad understood the significant impact presser productivity had on the bottom line. He was using “bread tabs” that were placed on each item pressed and then counted at the end of each day to measure presser performance. He knew his pressers would be much more productive if he could provide immediate feedback of their pressing rate. That is how the idea of the PieceCounter was born.

In 2000 Chad went to his brother for help with the technological aspect of the project. At that point the unique and innovative team of Chad and Craig was created. After six years of intense research and development the PieceCounter has become a reality.

The Wesvic Systems team of Craig and Chad is truly unique in that it combines first hand knowledge of the dry cleaning industry with cutting edge computer based technologies.